most unusual use for a public toilet?

You may have heard of the “Pop-Up” phenomenon. Usually it refers to temporary restaurants or temporary shops but it’s increasingly being used for other activities.
Walking along Bristol’s Park Row this summer, my sister and I passed a small building which houses public toilets. The building hasn’t been used for this purpose for some time, although the pervading smell would indicate to the contrary. On the day we walked past we were surprised to discover that a life drawing class was taking place in the gents’ toilet! 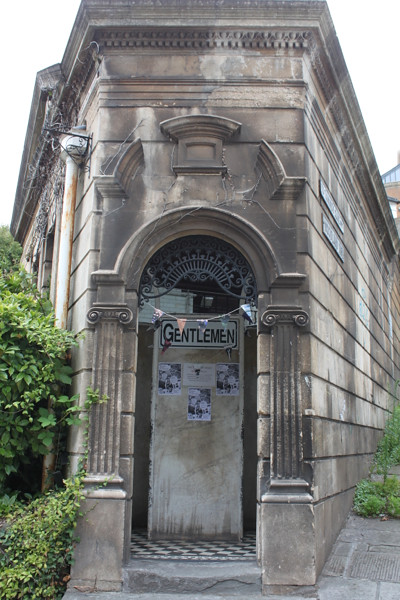 Unable to resist a challenge, in we went and sat down for half an hour or so to sketch the seated model. Although my sister has been attending life drawing classes I hadn’t attempted any such thing for more years than I care to remember. However, I did my best and confined myself to drawing the negative space around the model (and no, I’m not sharing my drawing, since you ask). 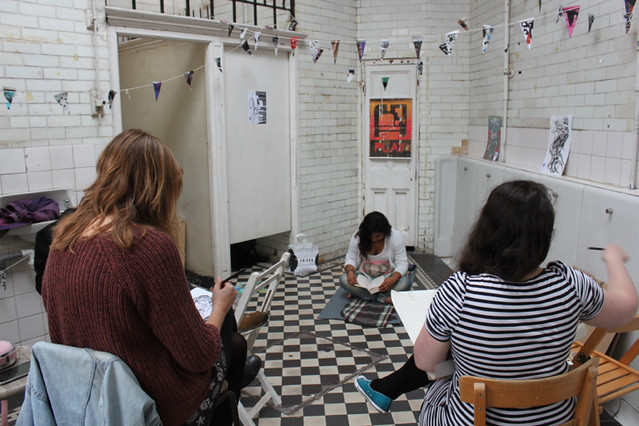 The Ladies toilets were being used as an exhibition space 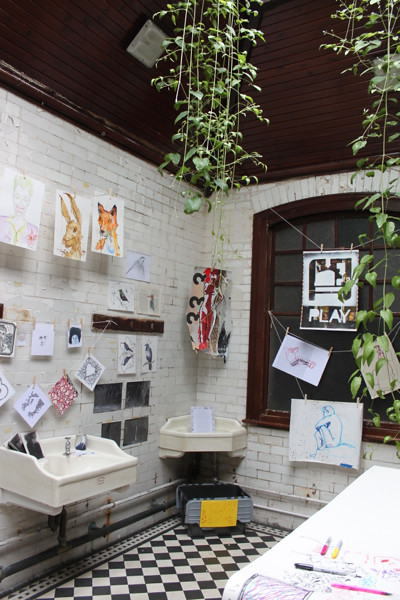 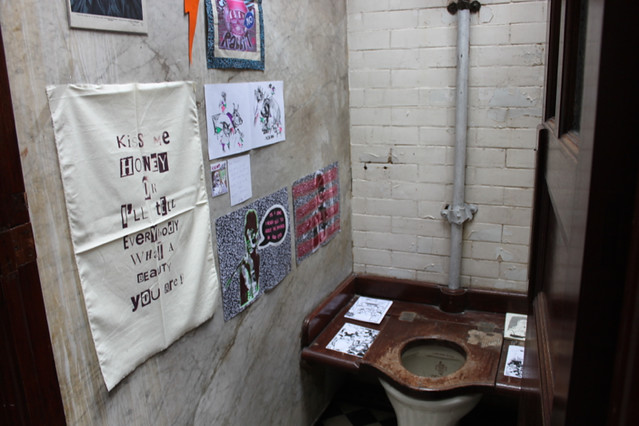 As you can see, the original fixtures and fittings are still in place but the invading greenery may take over in the not too distant future. After admiring some of the artwork, we left a contribution towards the purchase of some supplies to be used in similar endeavours in the future. It was definitely an interesting location for an art class and we applauded the initiative of the two girls who had organised it. 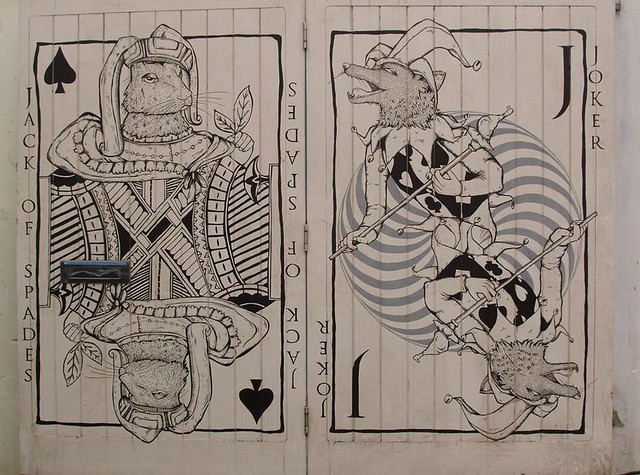 At the beginning of every month Kat of the Kat Eye Studio suggests we go back through our photos for the previous month to see if there is one that really speaks to our heart.

Wikipedia describes Street art as “an umbrella term defining forms of visual art created in public locations, usually unsanctioned artwork executed outside of the context of traditional art venues. The term gained popularity during the graffiti art boom of the early 1980s and continues to be applied to subsequent incarnations”.

It is a form of art that is still gaining popularity and, increasingly, is created to fulfill a commission, in order to enliven what would otherwise be an ugly blank wall or surface. Such works of art, thankfully, tend to attract less graffiti (the ugly, destructive kind).
A couple of weeks ago I came across this piece painted on the side of a house in Picton Street, Bristol, UK. 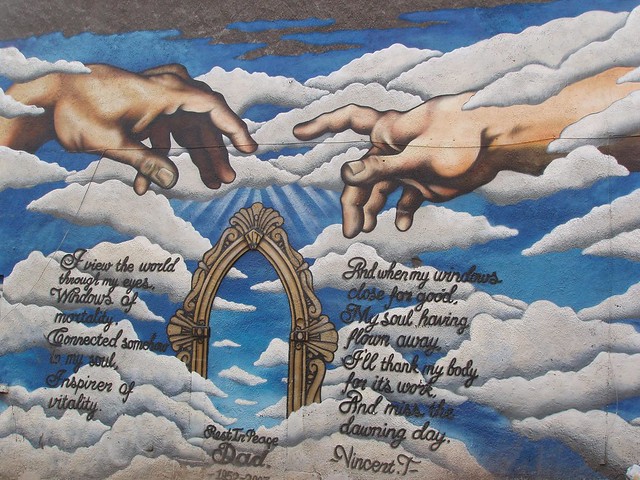 A small plaque nearby indicates that it was created to commemorate the passing of the artist’s father. Apart from camouflaging what would otherwise be a rather ugly blank wall, I think this is a wonderful tribute to a much-treasured father.

I can never resist the lure of photographing street art/murals/graffiti, however you like to call it.

this is one of my favourite pieces, in Siena, Italy

I’m sharing these with Sunday Stills

A couple of photos on the theme of ‘joy’:

Did you capture ‘joy’? Pop over to the Daily Post to see other ‘joyful’ photos.

This week Ailsa challenged us to share our photos of pathways.

a cobbled path in Joucas, Provence

path inside the chateau of Chartreuse de Bonpas, Provence

path in the village of Bellapais, northern Cyprus

My recent travels have taken me to 4 countries in less than one week. I started by spending a few days in the UK to catch up with my sister and her family who were over from the States.

On a walk through Clifton village in Bristol, we spotted these mouth-watering cupcakes in a bakery window.

This beautiful rose window is in the Clifton Arcade (a converted church building) – an Aladdin’s cave of antique, exotic jewellry and clothing shops.

The Clifton suspension bridge which spans the river Avon is one of Bristol’s crowning glories. It was built by Isambard Kingdom Brunel who also built the ship called the Great Britain which now resides in the renovated docks area.

On a very rainy day we visited the beautiful city of Bath and managed to catch sight of a couple of pigs in the King Bladud’s pigs in Bath exhibition. More pigs can be seen here.

My sister rarely sits still doing nothing and can often be found painting in her journal while the rest of us carry on talking around her. Where possible she paints directly from nature but if not, uses her own photos. Here she is painting some rowan leaves and berries she has picked from the garden.

At the moment she is working on a nature-inspired journal.  This is a spread from it.