Did you know that there are 108 distinguishing marks on the soles of the Buddha’s feet? I certainly didn’t and it took some research to track down what the meanings are. I have to admit that I don’t know if the interpretation varies in other Asian countries. These photos were taken in Myanmar. 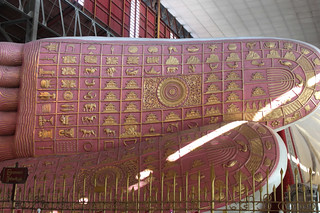 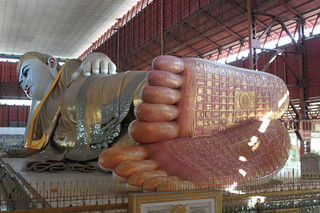 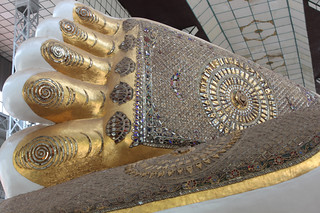 posted in response to Ailsa dropping a ladder on her feet.

Many of the Buddha images in Myanmar have intricate headpieces; I always think they look like giant ears or wings attached to their heads 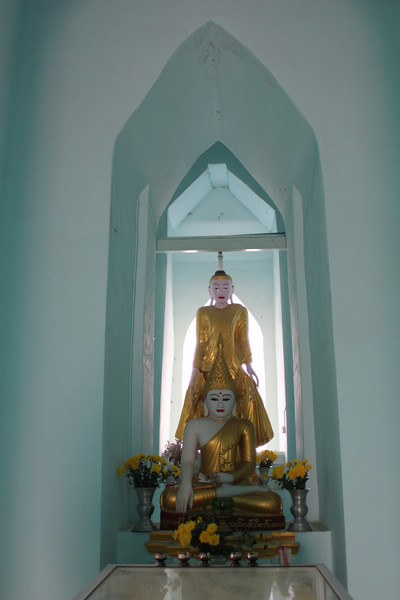 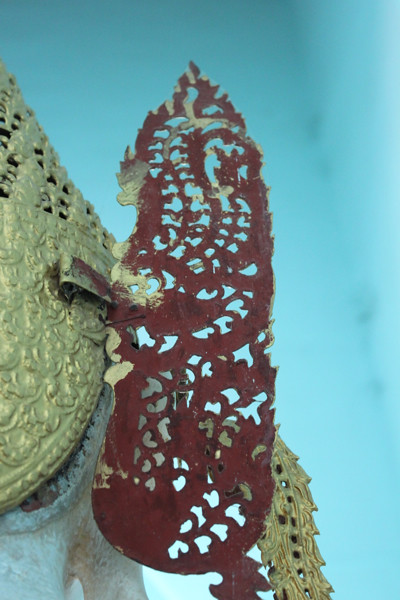 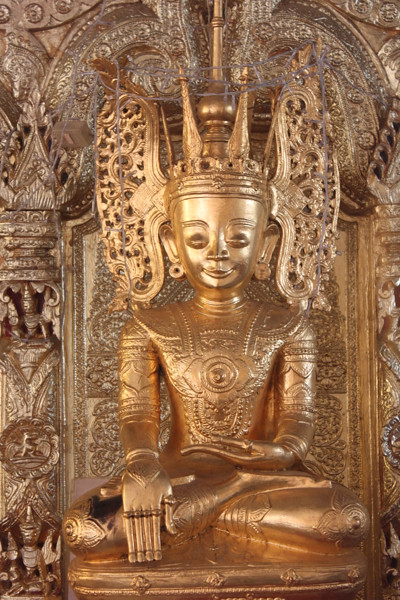 I agree entirely with Cheri that images of Buddha convey a sense of serenity and I’ve collected photos of a fair few Buddhas on my travels but this one, in Japan, is my all-time favourite 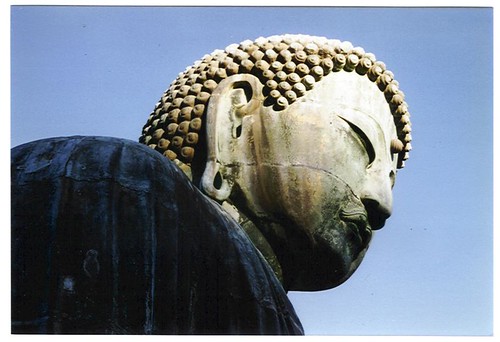 and this photo, also taken in Japan, conveys a sense of serenity too 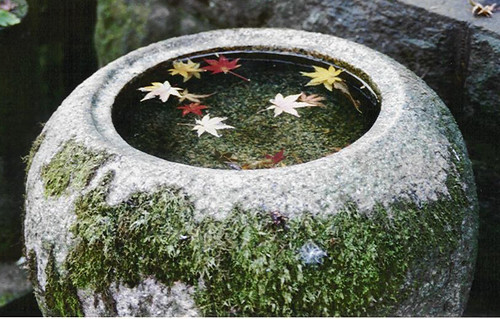 a word a week: Face

This week the dictionary fell open at FACE. Here are some faces I photographed in India earlier this year:

Some faces from Sri Lanka:

the face of a sleeping Buddha

a lady making a traditional Thai cup of coffee

a grotesque face at the white temple in Chiang Rai

Another 8am start and we drove to Anuradhapura – a very scenic drive through paddy fields and small villages, with wattle and daub shacks built right next to some much nicer properties.

After all the recent heavy rains much of the flat landscape was flooded.

Our first stop was the ancient Isurumuni Rajamaha Vihara (2nd century BC) with its rock temple and square lotus pond in front of it.

just above them is a carving of a man and a horse dating back to C6AD.

We went into the small museum here and I photographed the very famous sculpture of the lovers – he is upper caste and she is lower caste – as well as a couple of other sculptures.

In the reproduction of the cave temple there was a reclining Buddha statue, murals depicting scenes from the life of the Buddha and a fabulous painted ceiling.

Anuradhapura first became a capital in 380BC but was replaced by Polonnaruwa in the 11th century. It is now a Unesco world heritage site. It was and continues to be a major centre for Buddhism. The ruins are spread over a very large area so we only visited the most important ones.

We drove to the Mahavihara, the central part of the complex with relics dating from 3rd century BC to the 11th century AD, and where the Sri Maha Bodhi tree grows;

this sacred tree is the oldest historically authenticated tree in the world. It is in fact not one but several trees with golden supports to hold up some of its branches.

The day we were there was a poya (full moon) and therefore a day of public celebration. People had come from far and wide bringing picnics with them and all the women wore white.

From there we walked along the avenue

and then the Lovamahapaya, the Brazen Temple so-called because it once had a bronze roof but today only a few columns remain.

The huge white Ruvanvelisaya dagoba was set amongst trees and grassland and we only viewed it from afar.

The Thuparama was the tallest dagoba in the Anagiri complex and is still being restored.

In the Anagiri monastery complex we saw some well preserved carvings and another moon stone. The moon stones in Anuradhapura differ from those in Polonnaruwa in that “A half lotus was carved in the centre, which was enclosed by several concentric bands. The first band from the half lotus is decorated with a procession of swans, followed by a band with an intricate foliage design known as liyavel. The third band has carvings of four animals; elephants, lions, horses, and bulls. These four animals follow each other in a procession symbolizing the four stages in life: growth, energy, power and forbearance. The fourth and outermost band contains a carving of flames.” (Wikipedia). The bands are clearly visible in this photo.

The last stop of the day was to see the 4th century Samadhi Buddha. It is said that when viewed from one side he appears to be smiling and from the other, he appears to have a sad expression on his face but I have to admit that I couldn’t see any difference in his expression.

Nearby are the twin ponds of Kuttam Pokuna, the finest bathing tanks in Anuradhapura.

Although he ancient city of Polonnaruwa is nearly 1000 years old it’s in better repair than the younger Anuradhapura which we also visited a couple of days later. It was declared a world heritage site by Unesco in 1982. I particularly wanted to visit Polonnaruwa because there are beautiful Buddha statues here. The complex covers quite a large area and is divided into 5 groups.

We started our visit in the archeological museum which described the history of the city and had interesting reconstructions of what some of the buildings are thought to have looked like as well as a large collection of Hindu bronze statues.

The southern group is approached via a road running along the edge of a huge man-made tank (reservoir) whose name in Sinhalese means sea (because of its size), where we saw many people taking their early morning bath or washing their clothes.

Inside this first group the Potgul Vihara is an unusual structure consisting of a rectangular shape with a dagoba (a Buddhist stupa) at each corner and one in the centre. The central dagoba is thought to have held sacred books.

Also in this area is a 4m tall statue of a male. Various suggestions have been made regarding who he is supposed to be – possibly King Parakramabahu I; one tongue-in-cheek suggestion is simply ‘man holding a slice of water melon’. The statue is unique in its lifelike representation as opposed to the more stylised representations usually found in Buddhist art.

Our guide reached up to pull some leaves off a curry tree and just missed being bitten by this snake. He hadn’t even seen it although we saw it move towards him.

Not much is left of the royal palace which measures 31m by 13m and is said to have had seven storeys.

Parakramabahu’s audience hall is notable for the frieze of elephants, each in a different position, with a frieze of lions at the top of the steps.

Vatadage, a circular relic house, has a moon stone at its northern entrance, which is reputed to be the finest in Polonnaruwa. The design of the sandakada pahana of the Polonnaruwa period differs largely from that of the Anuradhapura period. The single band that was used to depict the four animals was removed, and processions of the elephant, lion and horse were depicted in separate bands. The most significant change is the removal of the bull from the sandakada pahana. The Anuradhapura tradition of placing sandakada pahanas only at entrances to Buddhist temples also changed, and they are found at the entrances of other buildings belonging to the Polonnaruwa period as well. (Wikipedia)

The Gal Pota (stone book), nearly 9m long it’s a huge representation of an “ola” book (the page of ola books are made from palm leaves). Part of the inscription states that this stone, weighing 25 tonnes, was dragged to its current position from Mihintale, a mere 100km away.

The 3 Buddha statues at the Gal Vihara

The Tivanka Image house contains a thrice-bent statue (this is what Tivanka means) of a Buddha; this form is usually reserved for female statues. There were some beautiful frescoes here, the only ones still extant in Polonnaruwa.

A portrait is a painting, photograph, sculpture, or other artistic representation of a person, in which the face and its expression is predominant. The intent is to display the likeness, personality, and even the mood of the person. For this reason, in photography a portrait is generally not a snapshot, but a composed image of a person in a still position. A portrait often shows a person looking directly at the painter or photographer, in order to most successfully engage the subject with the viewer. (Wikipedia)

Bonnie‘s challenge this week was to interpret ‘portrait’ in whatever way we wished.

and finally, 3 variations of the same image

I’ve been following Jon Sanwell’s blog about his life in Vietnam. He’s just published a book of portraits he took while in Vietnam. You can see see it here. He’s a very gifted photographer.