Sunflowers are such beautiful flowers and the sight of them always brightens the dreariest day. Last week I was staying close to a field where you can pick your own and made sure I had my camera with me. 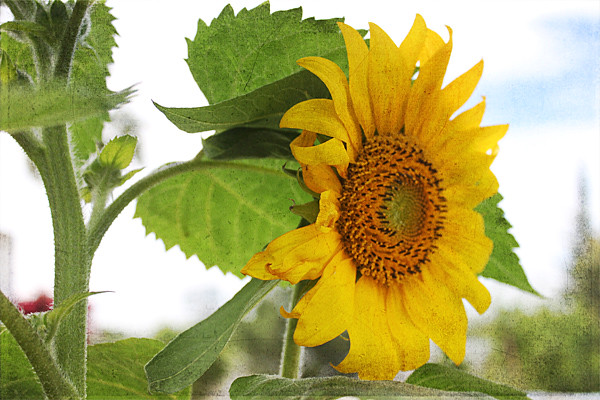 I used Kim’s cool grunge texture on this photo and reduced the opacity.

The Daily Post set us this challenge: Textures are everywhere: The rough edges of a stone wall. The smooth innocence of a baby’s cheek. The sense of touch brings back memories for us. What texture is particularly evocative to you?

all photos were taken in Thailand last year

This week Ailsa challenged us to come up with some photos featuring texture. Here are mine:

fishing nets and a piece of coral

Kim’s challenge for 15 May is another free and easy edition – any theme, any texture. I was in the UK recently and photographed these trees on the top of Exmoor. I like to think that they were engaged in a lively conversation and that the one on the right is gesticulating wildly

I can’t decide which version I like best – framed or unframed. Any views?

I have been experimenting with putting textured overlays on some of my photos. These are my very first attempts:

This one of a fennel plant silhouetted against the sky uses one of Jill’s photos of a piece of her fabric weaving. I love this photo and have a feeling it’s going to be used lots more times!

This one has been overlaid with a wooden door texture

and last but not least

At this stage I haven’t tried to do anything more complicated than overlay a single texture over the top of a photograph. Experiments with changing opacity, etc. may come later but it has taken me ages to do this successfully. I found a very good tutorial at the studioCalico. I would point out that rather than “open” both photos I used the “file>place” function for the photo of the texture. I used PSE8 for this.